I received this from a friend and I’d like to share it with you for your enjoyment.

To Our Clients, Colleagues, and Friends:

We do almost the same newsletter every Thanksgiving, and we’ve made only minor changes over the past 10-12 years. We call it Adam Smith and Karl Marx at Plymouth Colony.

When the pilgrims came to Plymouth Rock in 1620, they tried what they called “farming in common.”  They farmed the land together and shared the food equally.  This might sound good in theory, but it was a complete failure.  Those people who worked hard resented those who didn’t.  There was a lot of anger over this, and after three winters of under-production, more than half the original 101 pilgrims were dead, mostly from malnutrition.  After three years of near-starvation and the loss of half the colony, a new experiment was tried.

The governor of the colony, William Bradford, had come to suspect that the problem was the absence of private property.  In his now-famous passage on property rights in Of Plymouth Plantation (see page 162), Bradford wrote of how he “… assigned to every family a parcel of land… only for (their) present use…. This had very good success, for it made all hands very industrious, and much more corn was planted than otherwise would have been by any means….”

Bradford wrote that those who believed in communal property were deluding themselves into thinking they were “wiser than God.”  (Doesn’t that sound like Hayek’s concept of the “fatal conceit”?)  He drew up a map and gave each family a plot of land to call its own.  Production increased by a factor of five the first year. As Bradford wrote, “Each family, attempting to better its standing in the community, increased the hours worked on each plot.”

Isn’t it perfect that the very foundation of America was a free market economy? And this, amazingly, was 150 years before Adam Smith wrote in 1776 about how markets work.

We publish the following pretty much every year for Thanksgiving.  We got it from somewhere long forgotten, and over the years we’ve added bits and pieces:

How’s your health?  Not so good?  Give thanks you’ve lived this long.  Are you hurting?  Millions are hurting more.  Visit a veterans’ hospital or a hospital for children to appreciate what you have.

When you woke up this morning, were you able to hear the birds sing, use your voice, walk to the breakfast table, read the paper?  There are a lot of people today who are deaf, blind, paralyzed, or unable to speak.

How’s your financial situation?  Not good?  Most people on this planet have no welfare.  No food stamps.  No pensions.  No health insurance or Social Security.  In fact, one third of the people in the world go to bed hungry every night.

Are you lonely?  The way to have a friend is to be a friend.  If nobody calls, call someone.  Get out and do something nice for someone.  Are you unhappy?  Go out of your way to smile at people you bump into during the day.

Be kind to everyone, for everyone you meet might be fighting a hard, lonely battle of some kind. 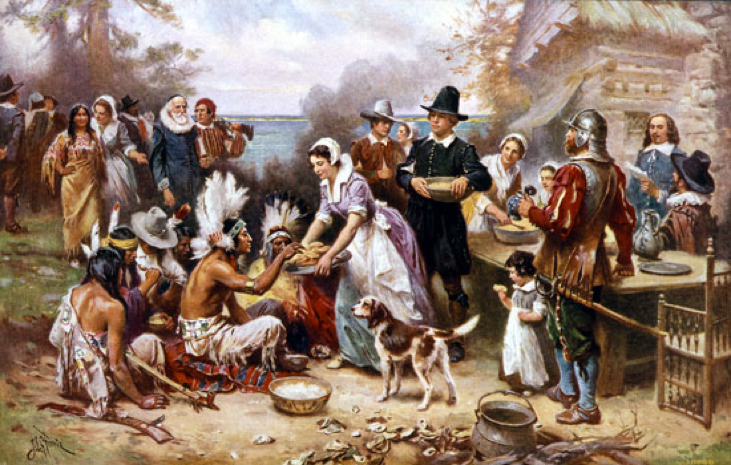 Are you unhappy with our government?  Don’t despair.  Our system has been saved over and over again by people who worried about our nation.  And worry not.  You can still worship at the place of your choice, cast a ballot in secret, and criticize your government.  Hundreds of millions of people live where this is not the case, where criticizing the government leads to a midnight knock on the door.

Are you worried about shrinking revenue and non-existent margins?  This is America where all things are possible.  Your hard work and persistence got you this far, and they’ll allow you to survive these hard times.

And let us also be thankful for our troublemakers and agitators, people like Patrick Henry, Sam Adams, Tom Paine, John Brown, Susan B. Anthony, and Martin Luther King.  Without them, we’d be a lesser country.

We should be thankful for the food before us and remember those who go without food.

We should be thankful for the friends we have and remember those who are friendless.

We should be thankful for our health and remember those with poor health.

We should be thankful for our families and remember those without families.

Let us be thankful for what we have, and not be unhappy with what we don’t have.