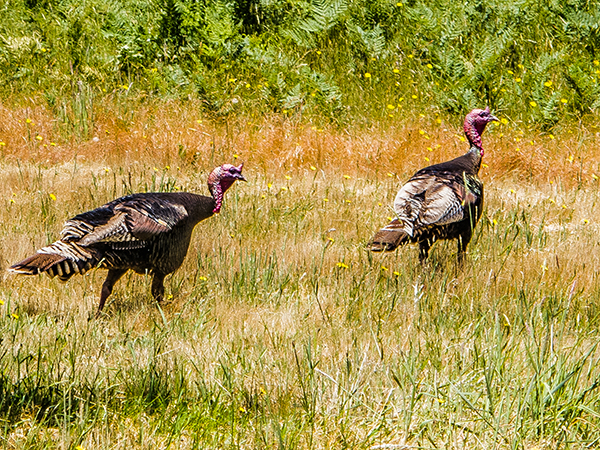 The name of my story is a play on the title of the 1959 movie “Some Like It Hot” with Marilyn Monroe, Tony Curtis and Jack Lemmon (it was recently re-run on public television). You are probably reading this story on Black Friday, the day after Thanksgiving, and after consuming enormous amounts of turkey on the previous night. Some enjoy eating cold turkey leftovers the following day, which has led to a number of expressions. For instance, “cold turkey” means a sudden withdrawal from drugs such as alcohol and opioids. There is also Norman Lears 1971 film by the same title, “Cold Turkey” and John Lennon’s song, “Cold Turkey” (1969) about giving up heroin. But why do we quit cold turkey? Here is what I found in the Merriam-Webster Dictionary. Making cold leftover bits of bird into a meal requires very little preparation, which led to the introduction of the phrase “Talk Turkey”, which means to speak blankly with little preparation. There is also the question how the bird eaten on Thanksgiving got the same name as the country — Turkey? You can read online how this happened. 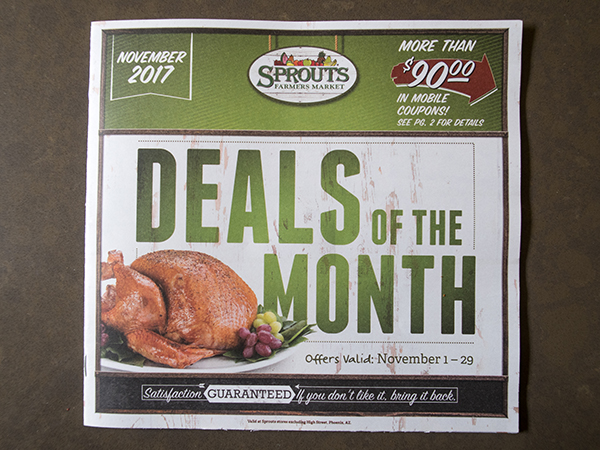 There are other confusing things connected with the Thanksgiving tradition of eating turkey. It became a federal holiday during the American Civil War, when in 1863, President Abraham Lincoln proclaimed a national day of “Thanksgiving and Praise to our Beneficent Father who dwelth in the Heavens.” Actually, the first Thanksgiving Day was celebrated during the autumn of 1621 by the Pilgrims of Plymouth, who probably did not have turkey in their meal, since Pilgrims came from England and their recipes called for the “wild fowl”, which was more likely meat of ducks and geese. Meanwhile, the holiday is no longer religious, and there are so many things in our lives to express our gratitude As far as food is concerned, online I found many websites that offered vegan and vegetarian alternatives for this holiday. One of them is called “Tofurkey”. 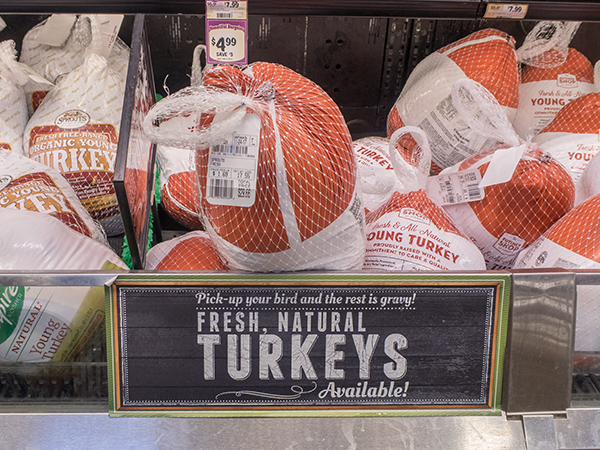 In the October/November 2017 issue of AARP Magazine, I found out that the punk pioneer John Joseph McGowan offers his own way of celebration of the Thanksgiving holiday. He hasn’t eaten meat since 1981, and has competed in nine Ironman Triathlons. The article said that after he goes out with others in New York and feeds the homeless providing up to 1000 meals to those in need, he has his friends gather in his house where he makes citrus stir-fry along with sweet potatoes, broccoli, salad and bread. It’s a meal to celebrate the holidays in a healthy and compassionate way. 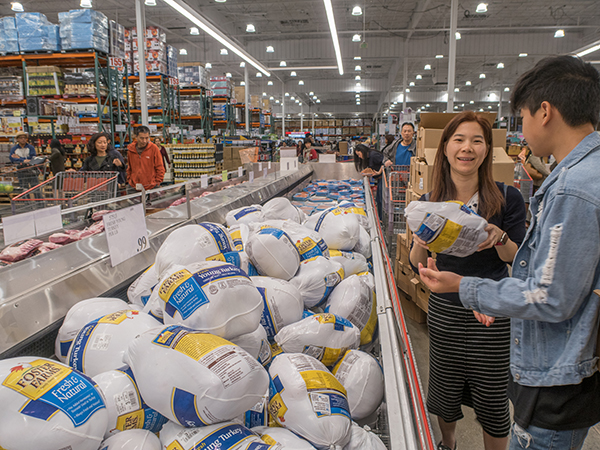 P.S. At the time I was writing this story I had only one image of the wild turkeys I photographed in The Sea Ranch to share with you. To get three more images, I had to go out “in the field”. Next to our office is “Sprouts Farmers Market”. There I found an advertising offering “Pick-up your bird” and the rest is gravy!” Do you see any resemblance between the bird called wild turkey and the packaged one (where are the wings)? When I was leaving the store, I picked up another advertisement for the deals of the month. There was an image of a “turkey” with the offer “Satisfaction GUARANTEED. If you don’t like it, bring it back”. It turns out, some might not like cold turkey. To get the missing fourth image I decided to visit Costco. There in a refrigerated container I found of huge white bags selling for 99 cents per pound. Next to them I encountered many new “Pilgrims” – immigrants from different countries who came to the stores of America to have a uniquely American experience – a slice of cold turkey.

I am using this opportunity to express my gratitude to you.

Enjoy Thanksgiving weekend with the turkey or without it. And share it with a friend.